Research has shown that cannabidiol, or CBD — which is a non-intoxicating cannabinoid molecule produced by cannabis — may have the potential to treat a range of health conditions, including chronic and acute pain, anxiety disorders, seizures caused by epilepsy, and symptoms of autism.

If you are one of the growing numbers of people who are looking into using CBD to treat a health condition, you may have already researched the medicinal applications and therapeutic effects of CBD. And during your research, you may have come across the term “entourage effect.” 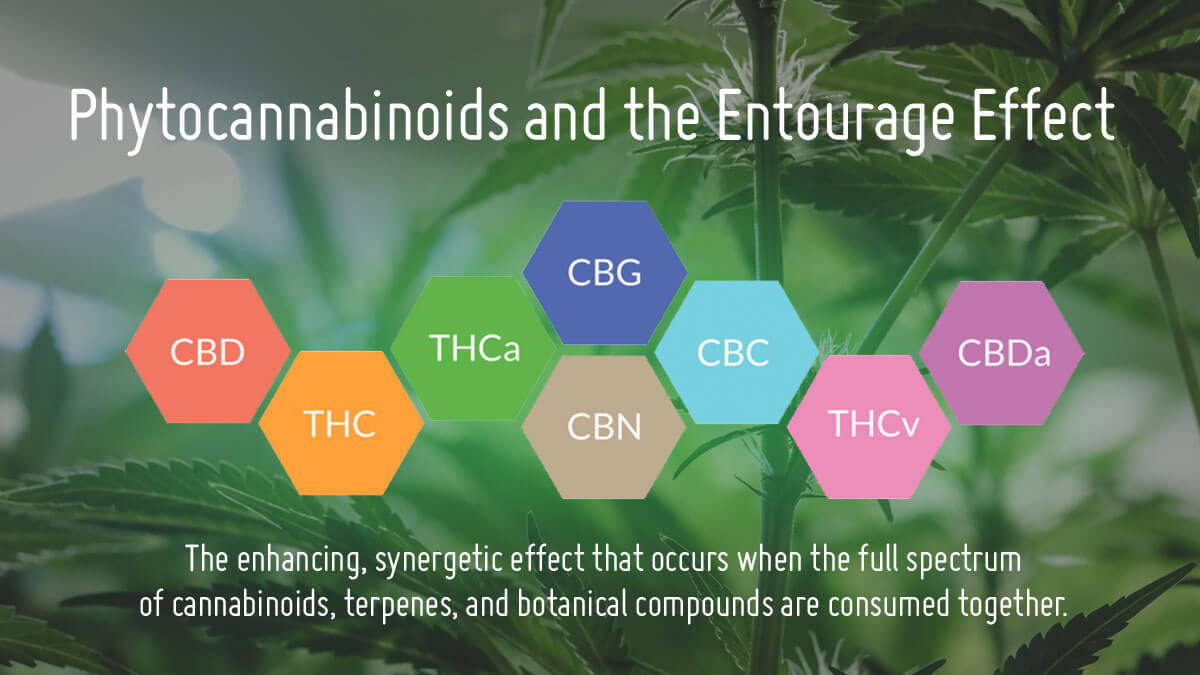 The entourage effect is a term that refers to the enhancing, synergetic effect that occurs when the full spectrum of cannabinoids, terpenes and botanical compounds that naturally occur in the cannabis plant are consumed together.

What are the benefits of the Entourage Effect?

Studies have suggested that the botanical compounds found in cannabis work better when consumed together than they do when consumed by themselves. That means that people may experience increased benefits from full-spectrum phytocannabinoid products than they would from products that isolate individual compounds.

In a letter that was published in Psychopharmacology, an international journal, Ethan B. Russo and John M. McPartland cited previous research which showed that full-spectrum cannabis extracts were “two or four times” more effective than THC alone — and in one study, caused “… 330% greater activity in mice than THC alone.” Read the entire article (PDF).

In addition to the therapeutic properties of phytocannabinoids and terpenoids, full-spectrum cannabis products also contain important nutrients that support overall health and can even be used to supplement your diet.

When all these components work together, they stimulate your endocannabinoid system which helps your body achieve optimal balance. As a result, users of full-spectrum CBD products often report that — in addition to seeing an improvement in specific health conditions — they also notice an improvement in other aspects of their physical and mental health, such as sleep, digestion or mood.

Can I get the Entourage Effect from using CBD products?

To get the maximum potential benefits from the entourage effect, you should look for full-spectrum CBD formulations that contain high concentrations of non-psychoactive phytocannabinoids combined with other active botanical compounds that naturally occur in cannabis. Using a full-spectrum CBD product may increase the therapeutic benefits and provide other nutrients that promote overall well-being.

By purchasing a full-spectrum product, you are giving yourself the best chance of getting all the “good stuff” that cannabis has to offer without the intoxicating effects.

To learn how our full-spectrum Phytocannabinoid (CBD) Oil can help you, contact us at 800-750-7051 or info@satimedusa.com.

We offer FREE consultations to help you determine the optimal solution for your needs.
Click here to get started!

Learn more about CBD and Phytocannabinoids