Many people use Phytocannabinoids such as CBD — to treat health conditions such as chronic and acute pain, anxiety disorders, seizures caused by epilepsy, and symptoms of autism. But what makes products like CBD so effective is their ability to interact with a system in your body called the endocannabinoid system (ECS) to produce a range of physical and psychological benefits.

Your ECS is a biological system that helps your nervous, immune, endocrine and digestive systems work together. Your ECS regulates some of your body’s basic functions, including:​​​​​ 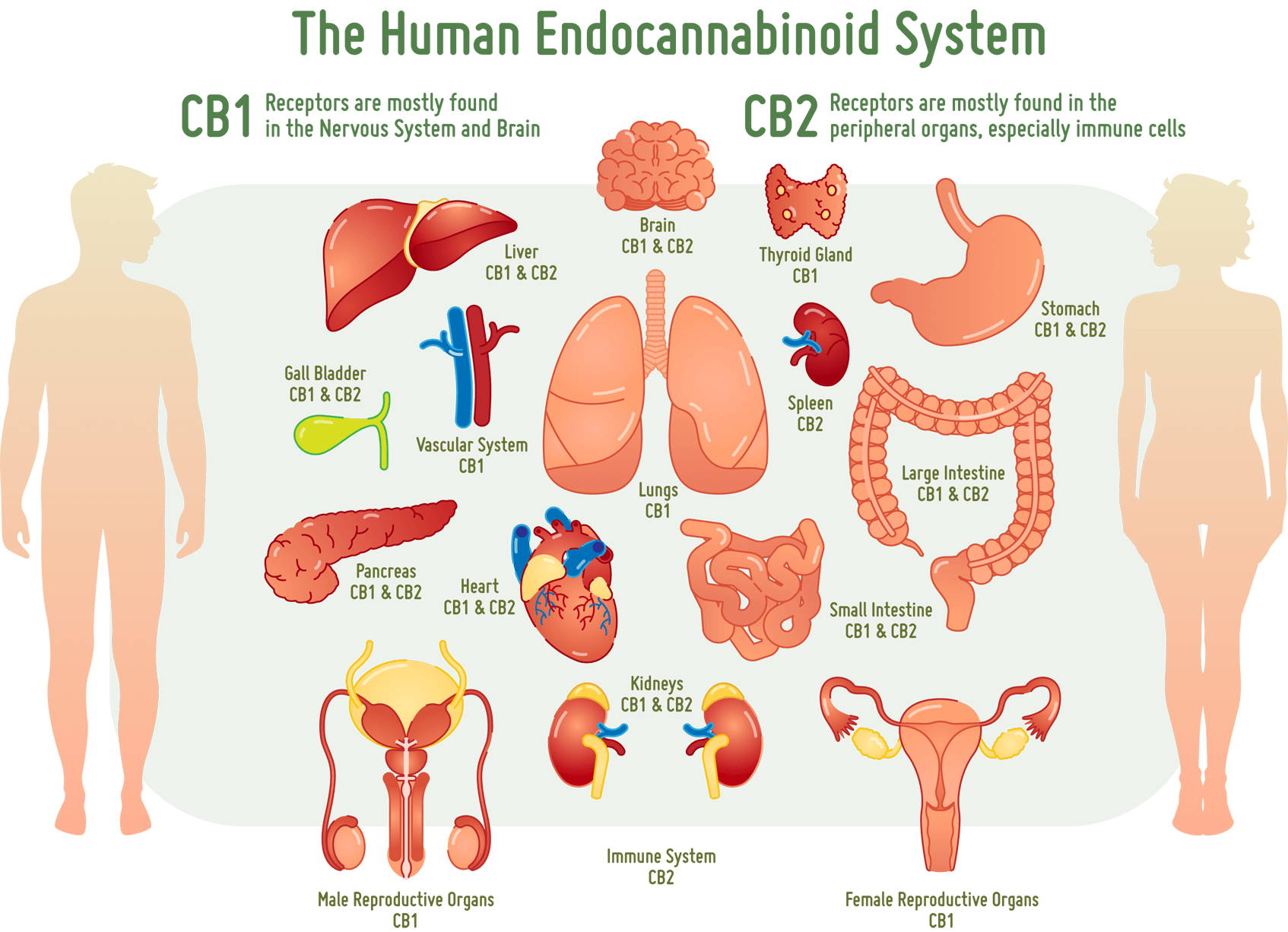 How does your ECS work?

Your ECS uses chemical compounds called cannabinoids as its “messengers” to help different bodily systems communicate and function correctly. There are two types of cannabinoids: Endocannabinoids, which are produced naturally by your body and include 2-AG and anandamide; and Cannabinoids that originate outside the body and are found in the hemp plant.

Endocannabinoids like CBD help bring balance to the systems of the body, and when they are replenished, homeostasis and well-being are restored. The wondrous hemp plant, rich with phytocannabinoids, is helping millions of people with oncologic, inflammatory, metabolic, and neurodegenerative disorders—as well as improving sleep and managing all kinds of acute and chronic pain.

Cannabis includes two major cannabinoids — THC, which has an intoxicating effect, and non-intoxicating CBD. It also includes more than 100 other trace cannabinoids, including cannabigerol (CBG), cannabinol (CBN) and cannabichromene (CBC). Cannabinoids that naturally occur in the hemp plant are collectively called Phytocannabinoids.

Cannabinoids are beneficial as they assist in coordinating our thoughts, emotions, and actions by binding or interacting with the Endocannabinoid System’s CB1 and CB2 receptors. Just as a key fits a lock, cannabinoids are designed to link together with the cannabinoid receptors. When the link occurs at the neuron, it triggers a series of events that carry a message and initiate a variety of cellular responses within the body that are required for homeostasis and overall well-being.

When different cannabinoids bind to these receptors, it can produce a range of physiological effects. For example, THC found in cannabis binds to CB1 receptors that are primarily found in the brain and causes a psychoactive reaction. THC also binds to CB2 receptors elsewhere in the body, but usually does not cause a very strong reaction.

Researchers believe that CBD, on the other hand, does not bind directly to receptors. Instead, it prevents enzymes in your ECS from breaking down endocannabinoids, which leads to an increased amount of endocannabinoids in your system.

CBD also blocks receptors and prevents other cannabinoids, such as THC, from binding to them. In fact, CBD actually can counteract the psychoactive effects of THC. That’s why many people treat their health conditions using high-CBD, low-THC cannabinoid formulations — they can get all the benefits of cannabis without the intoxicating effects.

How was the ECS discovered?

Although researchers had been studying cannabis and its various components for years, a scientist named Lisa Matsuda and her team announced a breakthrough discovery in 1990: They identified a receptor that was sensitive to THC in the brains of lab rats. Read more about their discovery (PDF).

After further study, researchers found that people have the same receptor. Researchers also conducted studies on genetically engineered mice that did not have the THC receptor and found that THC did not affect these mice. Soon, other scientists were able to identify a second receptor — as well as two endocannabinoids.

Scientists named this system the endocannabinoid system, which is a combination of the words “endogenous” (which means “originating inside the body”) and “cannabinoid” (which refers to the group of compounds that cause activity in your ECS).

How does the use of CBD support the ECS?

Researchers have suggested that some people may have a condition called clinical endocannabinoid deficiency (CECD), which means that their ECS does not naturally produce enough endocannabinoids to keep their bodily systems functioning correctly. Citing clinical experience, researchers believe CECD may play a role in the development of chronic conditions such as migraines, fibromyalgia and irritable bowel syndrome.

Although further study is needed, researchers believe that using cannabinoids to support or modify the endocannabinoid system has the potential to treat a range of health conditions, including:

Users of full-spectrum CBD products may experience additional therapeutic benefits caused by the “entourage effect.” The entourage effect is a term that refers to the enhancing, synergetic effect that occurs when the full spectrum of cannabinoids, terpenes and botanical compounds that naturally occur in the cannabis plant are consumed together, as opposed to consuming individual cannabinoids by themselves.

These full-spectrum CBD products also contain vitamins, minerals and other compounds that are essential to balance, health and well-being. As a result, users of full-spectrum CBD products often report that — in addition to seeing an improvement in specific health conditions — they also notice an improvement in some of the basic functions that are regulated by the ECS, such as sleep, digestion and mood.

Although research on the ECS and the therapeutic benefits of cannabis is ongoing, many people with physical and mental health conditions aren’t waiting for additional study results. Instead, they are forging ahead and turning to Phytocannabinoids such as CBD for symptom relief — and many are experiencing life-changing results.

To learn how our full-spectrum Phytocannabinoid (CBD) Oil can help you, contact us at 800-750-7051 or  info@satimedusa.com.

We offer FREE consultations to help you determine the optimal solution for your needs.
Click here to get started!

Learn more about CBD and Phytocannabinoids